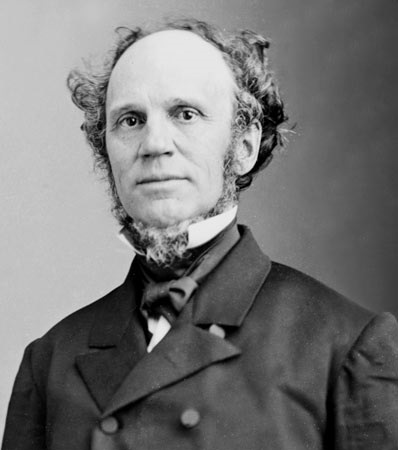 Born in Pompey, New York, Seymour was admitted to the New York bar in 1832 but primarily focused on managing his family's business interests. After serving as a military secretary to Governor William L. Marcy, Seymour won election to the New York State Assembly. He was elected that body's speaker in 1845 and aligned with Marcy's "Softshell Hunker" faction. Seymour was nominated for governor in 1850 but narrowly lost to the Whig candidate, Washington Hunt. He defeated Hunt in the 1852 gubernatorial election, and spent much of his tenure trying to reunify the fractured Democratic Party, losing his 1854 re-election campaign in part due to this disunity.

Despite this defeat, Seymour emerged as a prominent national figure within the party. As several Southern states threatened secession, Seymour supported the Crittenden Compromise as a way to avoid civil war. He supported the Union war effort during the Civil War but criticized President Abraham Lincoln's leadership. He won election to another term as governor in 1862 and continued to oppose many of Lincoln's policies. Several delegates at the 1864 Democratic National Convention hoped to nominate Seymour for president, but Seymour declined to seek the nomination. Beset by various issues, he narrowly lost re-election in 1864. After the war, Seymour supported President Andrew Johnson's Reconstruction policies.

Entering the 1868 Democratic National Convention, there was no clear front-runner for the Democratic presidential nomination, but Seymour remained widely popular. Serving as the chairman of the convention, as he had in 1864, Seymour refused to seek the nomination for himself. After twenty-two indecisive ballots, the convention nominated Seymour, who finally relented on his opposition to running for president. Seymour faced General Ulysses S. Grant, the widely popular Republican Party nominee, in the 1868 election. Grant won a strong majority of the electoral vote, though his margin in the popular vote was not as overwhelming. Seymour never again sought public office but remained active in politics and supported Grover Cleveland's 1884 campaign for president. Provided by Wikipedia
Loading...