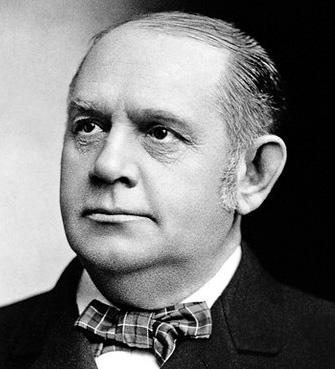 Marcus Alonzo Hanna (September 24, 1837 – February 15, 1904) was an American businessman and Republican politician, who served as a United States Senator from Ohio as well as chairman of the Republican National Committee. A friend and political ally of President William McKinley, Hanna used his wealth and business skills to successfully manage McKinley's presidential campaigns in 1896 and 1900.

Hanna was born in New Lisbon (today Lisbon), Ohio, in 1837. His family moved to the growing city of Cleveland in his teenage years, where he attended high school with John D. Rockefeller. He was expelled from college, and entered the family mercantile business. He served briefly during the American Civil War and married Charlotte Rhodes; her father, Daniel Rhodes, took Hanna into his business after the war. Hanna was soon a partner in the firm, which grew to have interests in many areas, especially coal and iron. He was a millionaire by his 40th birthday, and turned his attention to politics.

Despite Hanna's efforts on his behalf, Ohio Senator John Sherman failed to gain the Republican nomination for president in 1884 and 1888. With Sherman becoming too old to be considered a contender, Hanna worked to elect McKinley. In 1895, Hanna left his business career to devote himself full-time to McKinley's campaign for president. Hanna paid all expenses to get McKinley the nomination the following year, although he was in any event the frontrunner. The Democrats nominated former Nebraska Congressman William Jennings Bryan, who ran on a bimetallism, or "Free Silver", platform. Hanna's fundraising broke records, and once initial public enthusiasm for Bryan and his program subsided, McKinley was comfortably elected.

Declining a Cabinet position, Hanna secured appointment as senator from Ohio after Sherman was made Secretary of State; he was re-elected by the Ohio General Assembly in 1898 and 1904. After McKinley's assassination in 1901, Senator Hanna worked for the building of a canal in Panama, rather than elsewhere in Central America, as had previously been proposed. He died in 1904, and is remembered for his role in McKinley's election, thanks to savage cartoons by such illustrators as Homer Davenport, who lampooned him as McKinley's political master. Provided by Wikipedia
1