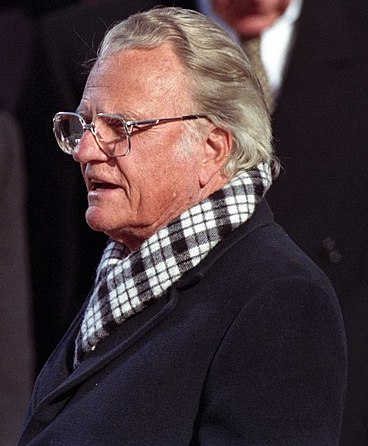 William Franklin Graham Jr. (November 7, 1918 – February 21, 2018) was an American evangelist, a prominent evangelical Christian figure, and an ordained Southern Baptist minister who became well-known internationally in the late 1940s. One of his biographers has placed him "among the most influential Christian leaders" of the 20th century.

As a preacher, he held large indoor and outdoor rallies with sermons that were broadcast on radio and television; some were still being re-broadcast into the 21st century. In his six decades on television, Graham hosted annual "Crusades", evangelistic campaigns that ran from 1947 until his retirement in 2005. He also hosted the radio show ''Hour of Decision'' from 1950 to 1954. He repudiated racial segregation and insisted on racial integration for his revivals and crusades, starting in 1953; he also invited Martin Luther King Jr. to preach jointly at a revival in New York City in 1957. In addition to his religious aims, he helped shape the worldview of a huge number of people who came from different backgrounds, leading them to find a relationship between the Bible and contemporary secular viewpoints. According to his website, Graham preached to live audiences of 210 million people in more than 185 countries and territories through various meetings, including BMS World Mission and Global Mission.

Graham was a spiritual adviser to U.S. presidents, and he provided spiritual counsel for every president from Harry S. Truman (33rd) to Barack Obama (44th). He was particularly close to Dwight D. Eisenhower, Lyndon B. Johnson (one of Graham's closest friends), and Richard Nixon. He was also lifelong friends with another televangelist, the founding pastor of the Crystal Cathedral, Robert Schuller, whom Graham talked into starting his own television ministry.

Graham operated a variety of media and publishing outlets. According to his staff, more than 3.2 million people have responded to the invitation at Billy Graham Crusades to "accept Jesus Christ as their personal savior". Graham's evangelism was appreciated by mainline Protestant denominations, as he encouraged those mainline Protestants who were converted to his evangelical message to remain within or return to their mainline churches. Despite his early suspicions and apprehension, common among contemporaneous evangelical Protestants, towards Roman Catholicism, Graham eventually developed amicable ties with many American Catholic Church figures and later encouraged unity between Roman Catholics and Protestants. As of 2008, Graham's estimated lifetime audience, including radio and television broadcasts, topped 2.2 billion. One special televised broadcast in 1996 alone may have reached a television audience of as many as 2.5 billion people worldwide. Because of his crusades, Graham preached the gospel to more people in person than anyone in the history of Christianity. Graham was on Gallup's list of most admired men and women a record 61 times. Grant Wacker writes that by the mid-1960s, he had become the "Great Legitimator": "By then his presence conferred status on presidents, acceptability on wars, shame on racial prejudice, desirability on decency, dishonor on indecency, and prestige on civic events". Provided by Wikipedia
Showing 1 - 14 results of 14 for search 'Graham, Billy, 1918-2018', query time: 0.14s Refine Results
1