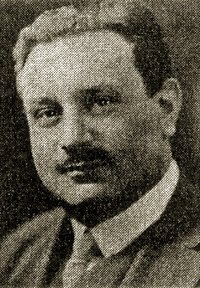 Faÿ had first-hand knowledge of the United States, having studied at Harvard, and translated into French an excerpt of Gertrude Stein's ''The Making of Americans'' and wrote his view of the United States as it was at the beginning of Franklin D. Roosevelt's administration. He also published studies of Benjamin Franklin and George Washington.

Faÿ was a friend of Gertrude Stein, Alice B. Toklas and of the American composer Virgil Thomson, who owed to Faÿ his access to French intellectual circles, for Faÿ knew most of the people in musical and literary Paris. He was active in compiling files on and attacking and imprisoning Freemasons during the Vichy regime, 1940–44. He was convicted and sentenced to life in prison. He escaped after five years and resumed teaching history in Switzerland, at Fribourg, Ouchy and Lutry, where he taught European History, American History and Cultural History. Provided by Wikipedia
1